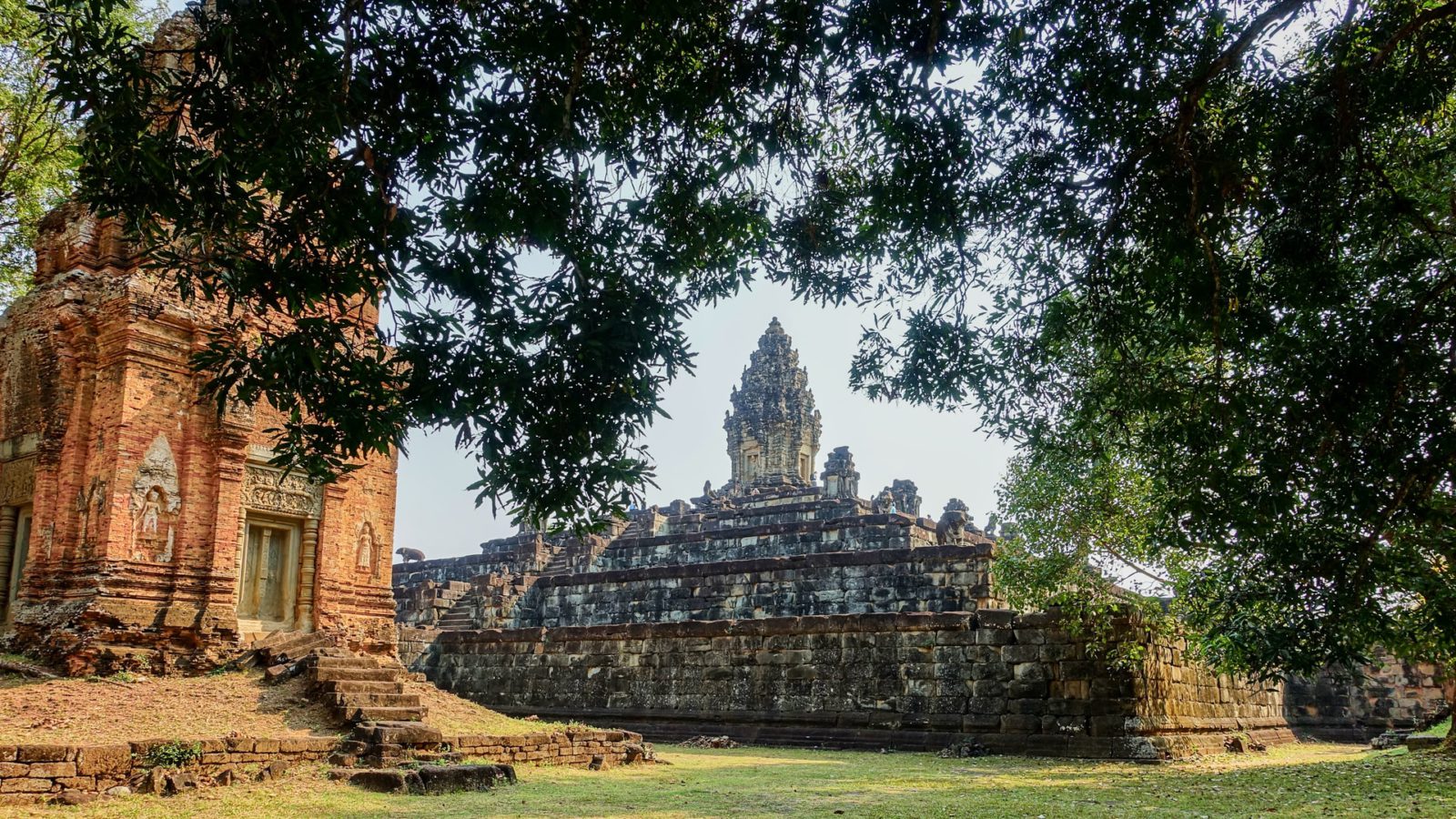 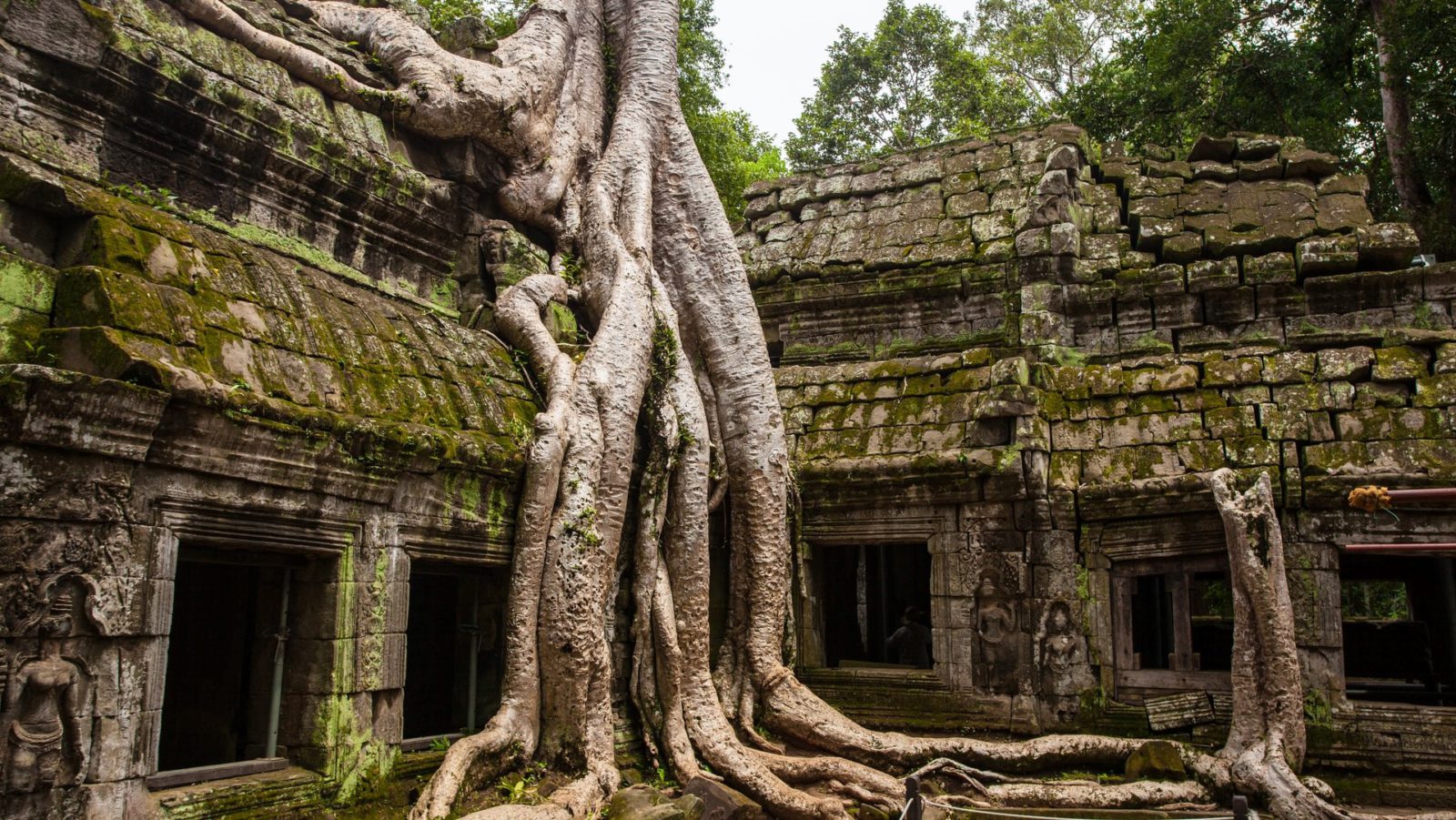 This short tour will introduce you to the small and grand circuit of Angkor. Discover the majesty and vaste footprint of Angkor Wat, a UNESCO World Heritage Site. You will also visit the floating villages on Tonle Sap Lake.

DAY 1 SIEM REAP (ARRIVAL)
Upon arrival in Siem Reap, transfer to your hotel.
In the afternoon explore one of the jewels of Cambodia: the awe-inspiring Angkor Thom or ‘Great City’. This will include many of the finest Temples of King Jayavarman VII, who ruled from 1181 to 1220. At the southern gate of Angkor Thom, you will marvel at the imposing 23m (75-foot) high stone faces of Avalokiteshvara, featured in the Tomb Raider movie. These astonishing carvings inspire awe and wonder in all who view them. At the centre of this citadel lies the state temple of Bayon, which we will also visit. This temple-mountain, built at the end of the 12th century, is adorned with hundreds of gigantic stone faces. This tour also includes the Terrace of Elephants, the Terrace of the Leper King and the 12 identical towers of Prasat Suor Prat. Later in the day you will discover the most famous temples from the 11th century: Baphuon, Phimeanakas, North Khleang and South Khleang. Conclude your day by watching the sun go down on Angkor.
Overnight in SIEM REAP

DAY 2 SIEM REAP
Today you enjoy an excursion to Banteay Srei, a temple that dates back to 967 AD. The temple is dedicated to the Hindu god Shiva and is famed for its intricate friezes carved into its red sandstone walls. On the return we will visit Banteay Samre, built during Suryavarman II’s rule in the middle of the 12th century. Next on the itinerary are impressive temples from the 10th century: Eastern Mebon, Pre Rup, Prasat Kravan and Takeo (1004 AD).
In the afternoon you finally explore the highlight of your trip – Angkor Wat. Angkor Wat today is the largest sacred edifice on earth and of high importance for the Khmer itself. Constructed in 12th century by King Suyavarman II, Angkor Wat is dedicated to the Hindu God Vishnu. Surrounded by a giant moat, the temple itself can be reached via a beautiful naga balustrade only. Hundreds of ornaments and reliefs cover the walls of this huge and ancient construction. Once you climb up the steep steps to the top you can enjoy a beautiful view of the surrounding jungle. Continue to the Ta Prohm temple, which was built in the late 12th century; it is unforgettable due to the massive trees with thick roots that entangle the walls. They were left here intentionally by the archaeologists working on the site. While clearing back the forest it was decided to leave them in place to serve as a reminder of how the original discovers found it and other temples. (B) Overnight in SIEM REAP

DAY 3 SIEM REAP
Today explore the Roluos group as well as some more temples built by Jayavarman VII. The Roluos group includes three temples – Bakong, Prah Ko and Lolei – dating from the late 9th century and corresponding to the ancient capital of Hariharalaya. Remains include 3 well-preserved early temples that venerated the Hindu gods. The bas-reliefs are some of the earliest surviving examples of Khmer art. Modern-day villages surround the temples. Afterwards continue to Preah Khan, which was built on the site of Jayavarman VII’s victory over the invading Chams in 1191. This complex was a Buddhist university, a temple, a kind of monastery and a city with a whole population divided according to their functions. It was built by Jayavarman VII and dedicated to his father. Built before the end of the 12th century, this monument is an artificial island, measuring 350 metres on each side, built in the middle of a reservoir which is also manmade. The modern name, Neak Pean, comes from the motif of serpents encircling the base of the central sanctuary. We will then visit Ta Som, an unrestored temple, built at the end of the 12th century. It is dedicated to the father of the king (Buddhist), and is a replica to the Bayon style of art.
(B) Overnight in SIEM REAP

DAY 4 SIEM REAP (DEPARTURE)
This morning, you will enjoy a cool and relaxing boat trip on Tonle Sap Lake. Here you will visit the floating villages of Chong Kneas commune. Afterwards transfer to the airport.
(B)

You can extend your stay in Siem Reap with this package. Contact Guidepost Tours for further details. 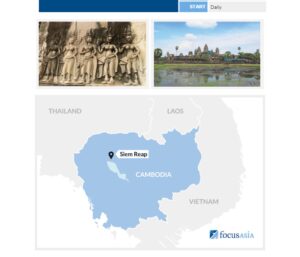