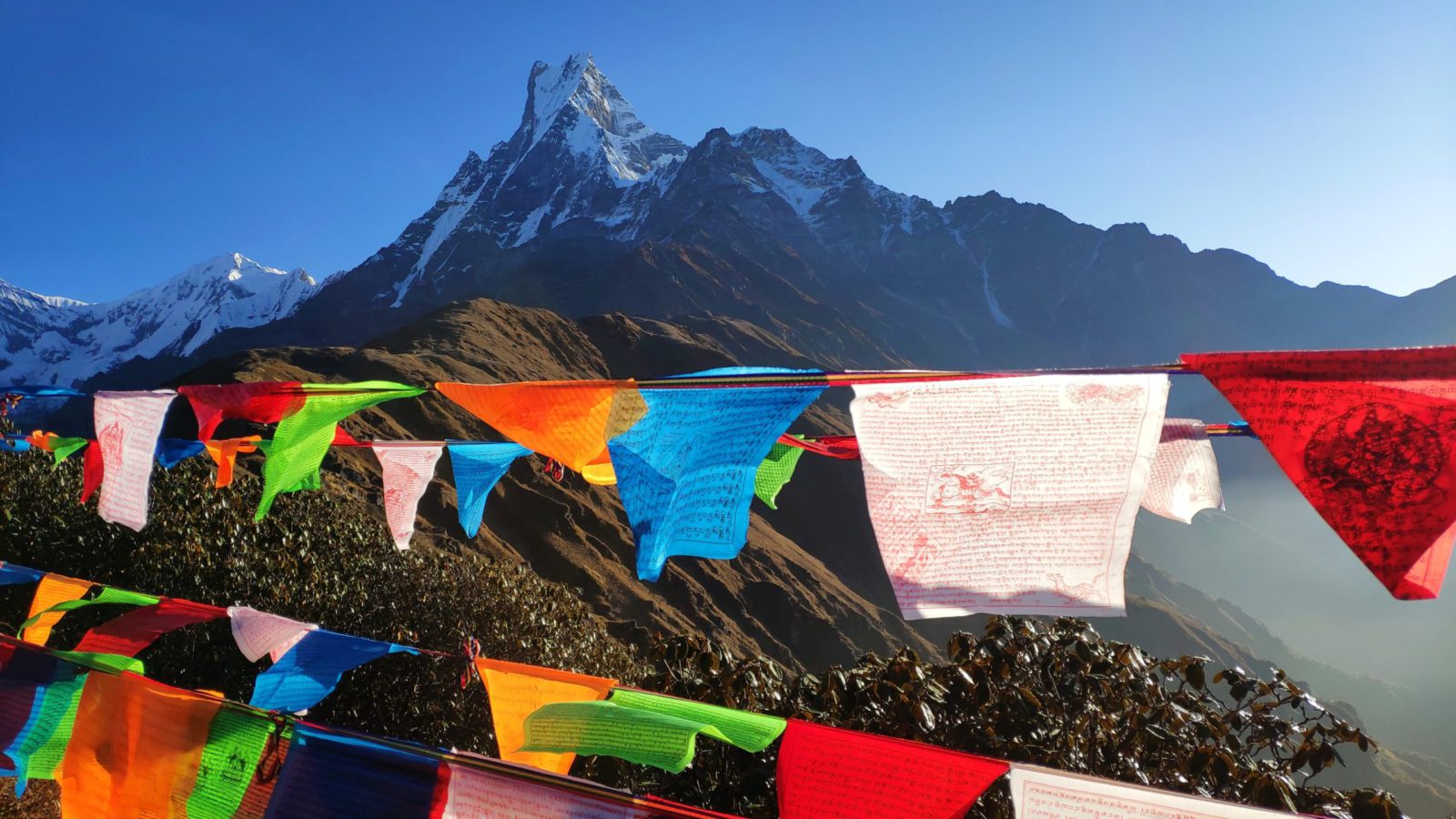 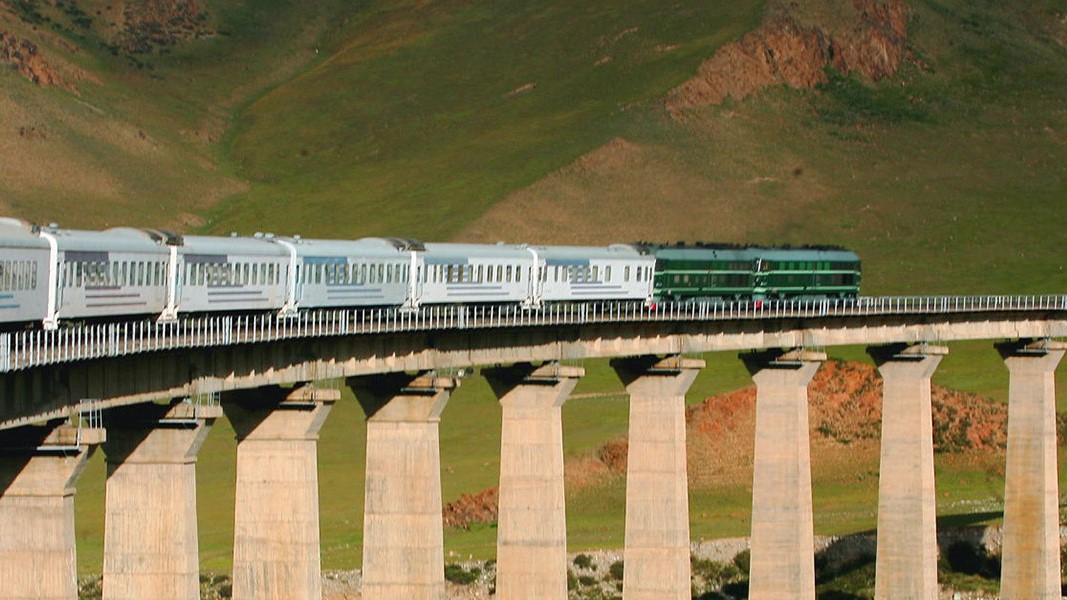 Combine a rail journey through China to Tibet and the mystical capital of Lhasa, aboard the comfortable Shangri-La Express. In the shadow of the Himalayas and known as the ‘Roof of the World’ due to its breathtaking average height of 13,200ft (4,060m) above sea level, Tibet is home to more Himalayan peaks than anywhere else. Mount Everest lies on its border with Nepal. As befits such a remarkable land, Lhasa is home to an amazing UNESCO collection of spectacular palaces and temples. Yet Tibet has been virtually inaccessible by land. That changed with the building of the Golmud to Lhasa railway. More than 600 miles (965kms) is at an altitude of over 13,000ft (4,000m) and much of this magnificent line runs over permafrost. With the summit, the Tangula Pass, at 16,640ft (5,072m) it is also the world’s highest railway. To travel on this line is an adventure, an experience as unique as the destination itself.

Guests are met upon arrival in Urumqi and are transferred to the Wanda Vista hotel. This evening we will enjoy a Welcome Dinner.

This morning we visit the renowned Provincial Museum in Urumqi, famous for having the artefacts and mummies of Caucasians who lived in the region between 1,500 and 4,000 years ago; There is also a fine collection of silk articles and other artefacts from various eras of history, as well as written materials in different languages. What most people come to see are the mummies and their artefacts and they are unusually well preserved. Until two decades ago, this culture was hardly known to historians and archaeologists, and their history and origins remain much of a mystery. The Xinjiang Autonomous Regional Museum houses the mummies and their artefacts that are some of the most significant archaeological discoveries in a hundred years and it is an excellent place to learn the history of this region.

This afternoon we board the Shangri-La Express for our onward journey through the remote wilderness of China to Lhasa.

Today we will visit the Old City of Kashgar, with a history of more than 2,000 years. Uygur people have lived here for generations carving out a splendid society in the process. Kashgar old city was the renowned centre at the crossroads of the Southern and Middle Silk Roads in the past. Tonight, we stay for one night at the five-star Radisson Blu Hotel Kashgar.

This morning’s tour arrangements include a visit to the Kashgar Bazaar. The very remoteness of Kashgar is what makes the market so extraordinary; partly due to the exotic produce for sale, partly because it is the only real place to shop in an area the size of western Europe.

Turpan is the location where the Flaming Mountains create a magnificent backdrop. First, we visit Jiaohe Ancient City which is one of the best preserved ancient cities in China, the ruins of the buildings are divided into temples, civilian dwellings and government offices, workshops and residential houses in the streets are still visible and time there is time spent in a world long disappeared.

In the afternoon, we take a fascinating tour to the world famous ancient underground irrigation system at Karez that has successfully fed the rich orchards and vineyards for centuries; The system is considered as one of the three great projects in China with the other two being the Great Wall and the Grand Canal.

Then we will have a Uygur Family Visit where we will enjoy the traditional Uygur ethnic dancing and local snacks, experiencing real life and culture.

This morning we will explorer the vast natural beauty of the Sand Dunes by camel, where we will discover Crescent Lake, hidden amongst the towering sand dunes and has sustained life in this region for millennia.

In the small oasis city of Dunhuang we will visit the fascination Magao Thousand Buddha Cave Complex. This impressive site contains almost 500 grottoes, carved between 700 and 1,700 years ago. Inside we will see an amazing collection of beautiful sculptures and murals depicting the evolution of Buddhist religious art over 1,000 years.

Today in Jiayugaun we visit the first pass at the west end of the Great Wall of China, the Jiayuguan Pass. Along with Shanhaiguan, it is one of the largest and most intact passes of the Great Wall. It was an important military fortress and also a vital traffic fort along the Silk Road, the world’s oldest trading route, connecting China, Central Asia and Europe. Standing in the endless desert with rolling mountains as its backdrop, this isolated pass will take you back to the desolation and loneliness of frontier life in ancient times.

After lunch we head for the Overhanging Great Wall, which was constructed in the year of 1539 during the Ming Dynasty (1368-1644). The wall was built in order to support the already existing Jiayuguan Fort which held a key role in the defence mechanism of the area around Jiayuguan. Parts of the wall are steep so for those who do make it to the top will enjoy a bird’s eye view of endless Gobi Desert, a couple of oases and snow-capped mountains seen from a great distance.

Today we explore this historic and multi-ethnic region which is home to an incredible 37 different nationalities. Located on the eastern edge of Qinghai Province, Xining’s history can be traced back 2,100 years to antiquity. Here we will experience some of the distinctive traditions and customs of this region.

We set out from our train this morning stopping first at Dongguan Mosque in Xining, the largest mosque in Qinghai, unique due to its traditional Chinese architecture that differs from an Arabic style.

In the afternoon we will visit the Shuijingxiang Market. At the entrance of two intersecting alleys, each more than 1,100 metres long are more than 3,000 fixed stalls. The market has everything from food and drink to articles for daily use. You can not only find lotus roots and wild rice stems, which are products of Southern China but also seafood from the coast.

On arrival to Golmud, we will say farewell to the Shangri-La Express train and check-in to the Doubletree by Hilton Hotel for a one-night stay. Spend today at your leisure, with the option of exploring the local city area or perhaps enjoy the hotel’s swimming pool and fitness area.

At Golmud we board the high-altitude train that will take us on an unforgettable 14-hour journey along the 1,142km ‘Roof of the World’ line to Lhasa, cresting the 16,640ft (5,072m) Tangula Pass. This is the world’s highest railway pass, reaching an unbelievable 3 miles (5km) above sea level. Due to the high altitude, supplementary oxygen is pumped in through the ventilation system. Personal oxygen masks are available if required.

Upon arrival in Lhasa we are transferred to the luxurious five-star Shangri-La Hotel for a three-night stay. Centrally located, it lies between the Norbulingka Palace and the Potala Palace, respectively the former summer and the former winter residence of the Dalai Lama, and together now form a Unesco World Heritage Site. The sweeping landscapes surrounding this exclusive hotel provide a timeless, inviting setting for contemplation as well as exploration..

Lhasa is located in a small basin surrounded by mountains, and it literally means ‘place of the gods’. At an altitude of around 11,975ft (3,650m) it is one of the highest cities in the world; it is also the traditional seat of the Dalai Lama and the holiest centre of Tibet with over a thousand years of cultural and spiritual history.

We will visit Norbulingka, the Dalai Lama’s Summer Palace, it was built in the 1740’s as a retreat from which to escape the heat of the summer. Meaning either ‘jewel garden’ or ‘precious garden’ it is still a tranquil haven from the noise of the city and a wonderful place to explore.

There will also be free time to wander through Lhasa and soak up the atmosphere of this picturesque city or to take an optional drive outside Lhasa to visit a local village and see the life of farmers there.

On our second full day here, we visit the 13th century Jokhang Temple, Tibet’s holiest shrine and the spiritual home for almost all Tibetans. Next we explore the adjacent Barkhor market, the oldest market in the capital and a well-trodden route for the many pilgrims who make their way to the temple. A local lunch is accompanied by traditional folk music.

A real highlight of our stay in Lhasa will be the visit to the 17th century Potala Palace, former seat of the Tibetan Government and the Dalai Lama’s winter residence before he fled to India in 1959. It contains thousands of rooms, dominates the city skyline. Perched upon Marpo Ri hill, 130 meters above the Lhasa valley, the Potala Palace rises a further 170 metres, is the greatest monumental structure in Tibet and one of the architectural wonders of the world.

Tonight we will enjoy a farewell dinner.

Breakfast in the hotel before onward departures.