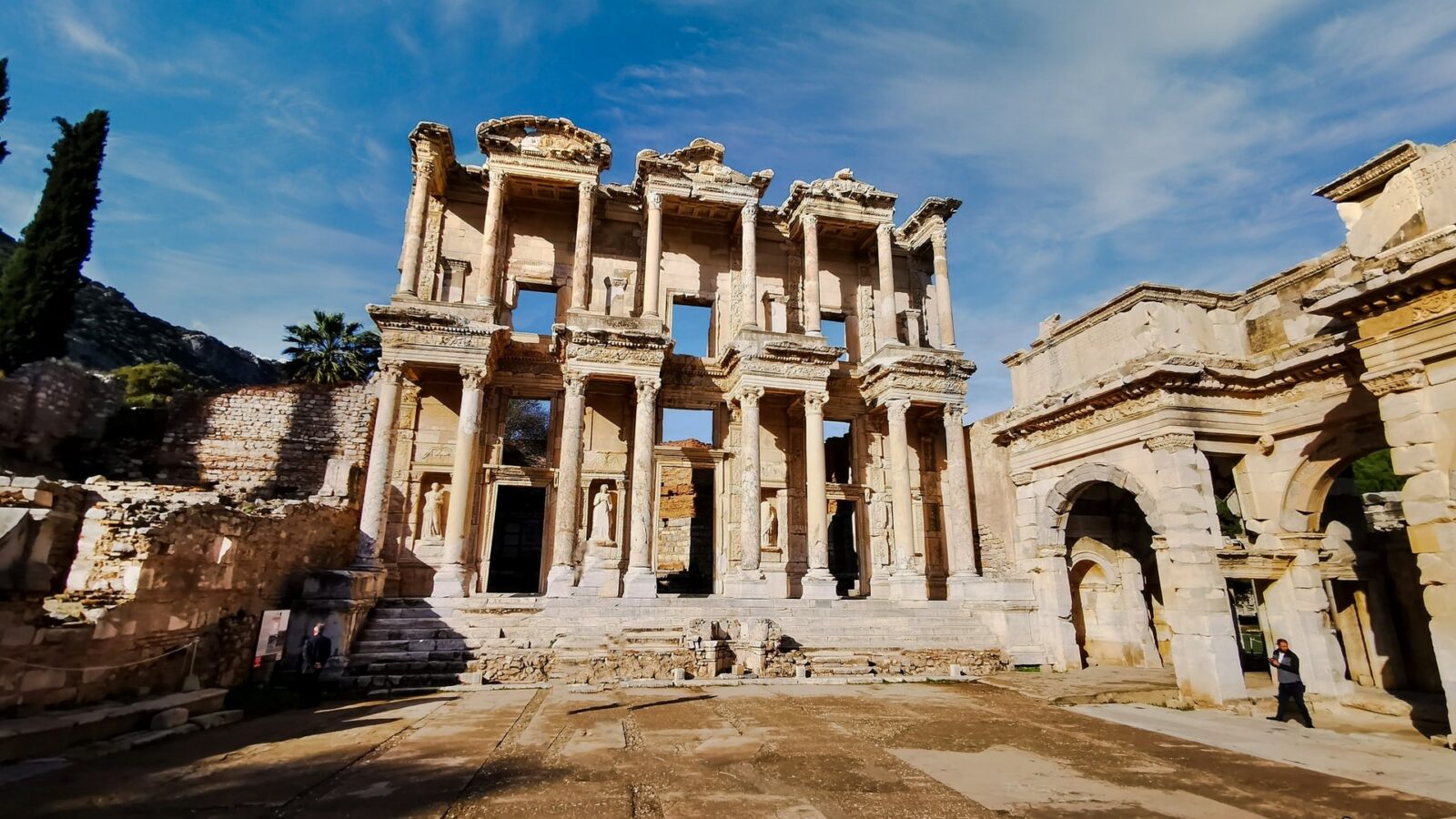 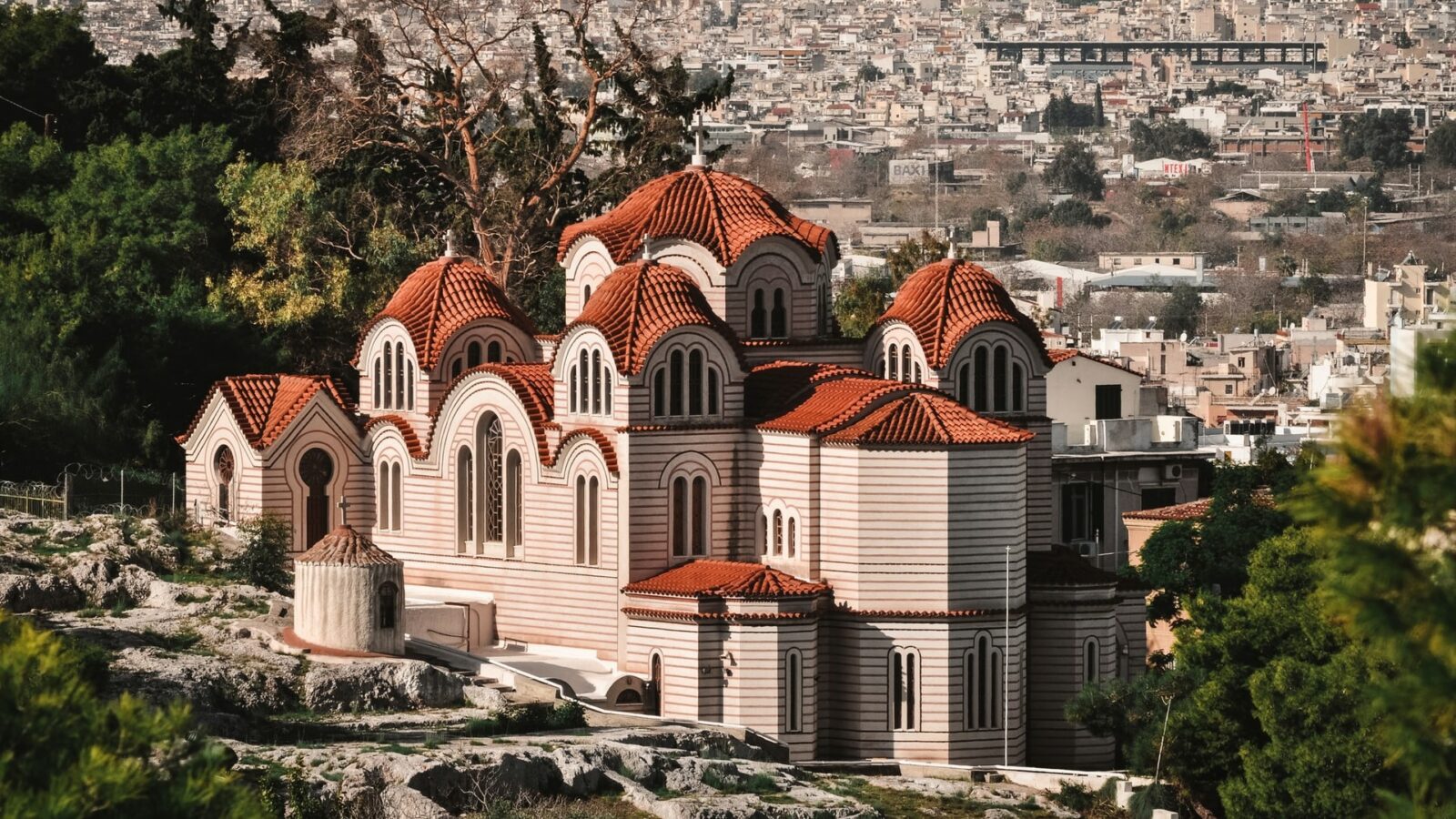 This wonderful first class Christian tour explores the Churches of Revelation in Turkey before cruising the Aegean Sea to Patmos, Crete and Santorini begore touring the Christian heritage sites of Greece

Today we embark on our Journey to the lands of ancient treasures and Christian history. Prepare yourself for a life-changing experience.

We transfer to our hotel in the charming city of Izmir, Turkey for the next two evenings. The remainder of your day is free to relax, sightsee on your own and enjoy your hotel facilities. 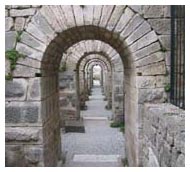 Our first visit of the day is Pergamum. The church of Pergamum was praised for its forbearance; (Rev. 2:12-17) it was here that the first Christians were executed by Rome. We’ll visit the fabled Acropolis, pass through the Royal Gates, view the foundations of the Altar of Zeus and visit the ruins of the library (which once held 200,000 volumes). Next we travel east to Thyatira viewing the ancient roadway and period columns. Thyatira was once a busy trading centre and famous as a “seller of purple,” the most favoured of the Seven Churches. We continue south to Izmir, which is the third largest city in Turkey and a long time centre for Jews and Christians. In Paul’s day, Izmir was known as Smyrna and was another of the Seven Churches (Rev. 2:8-11). Our lodging this evening will be in Izmir.

Departing our Hotel in Izmir, we’ll see Polycarp’s Church and visit the ancient roman agora. Then, we travel to Sardis, which was berated by John for its façade of strength when, in reality, it was weak (Rev. 3:1-6). Here coins were minted and the dyeing of wool originated. We’ll visit the gymnasium and synagogue. Our next stop is nearby Philadelphia from where we are challenged to “hold fast” and look forward to the coming of the “new Jerusalem” (Rev. 3:7-13) in the Book of Revelation. Not much is left of the city except for the ancient wall and the remains of a Byzantine basilica in the modern city of Alasehir. Our lodging this evening will be in a lovely spa hotel in Pamukkale.

Hierapolis, meaning “Sacred City,” was an ancient centre for pagan cults until it was transformed into a Christian centre in the first century. According to tradition, the Apostle Philip lived and was martyred in Hierapolis. It was likely the hot springs of Hierapolis (in contrast to the cold mountain springs near Colossae) that combined to bring application to the “lukewarm” Laodiceans (Rev 3:14-22). This connection between the cities lies behind Paul’s reference to Hierapolis and Laodicea in his epistle to the Colossians (Col 4:13). Laodicea contains many acres of ruins to visit including a stadium and remnants of a sophisticated water system. Nearby Colossae is well-known throughout Christian circles as the receiver of Paul’s letter to the Colossians. Today, the town has fallen into obscurity and nothing remains. We spend the remainder of the day traveling through the Turkish countryside arriving in the port city of Kusadasi where we spend two nights. The day will not be complete without a visit to a local Turkish Rug cooperative.

We travel to the nearby town of Selcuk for a visit of ancient Ephesus. Ephesus was once a thriving port town of 250,000 people. Today you can still see the spectacular excavations of the major streets in this ancient city. We view the Library, Agora, theatre, colourful mosaics in the aristocratic Terrace Houses, and a panoramic outlook of the surrounding ancient port area (including a wealth of church history and cultural insight). Then we continue with a visit to the Basilica Church of St. John, which houses an immersion baptismal and is believed to be resting place of John. From here we have an excellent overview of the Ephesus harbor, the Mosque of Jesus, and see the site of the Temple of Artemis, which is listed as one of the Seven Wonders of the Ancient World.

This morning, we embark our cruise ship and sail for a visit to the beautiful Isle of Patmos, which is under statutory protection as a historic monument. Here we have a tour to see the fortified monastery of St. John and the cave claimed to be where John received the Revelation. Back on the ship, enjoy dinner before settling in to your cabin for the night.

We disembark the cruise this morning and travel west with a rest stop and photos at the Corinth Canal. Next, we visit ancient Corinth, the city that inspired many of Paul’s most familiar letters and is a highlight for the New Testament scholar. See the Archaeological Museum, the Market Place, the Bema, and the Temples. To enjoy a devotional in the midst of the ruins of the church of Corinth and see the pillars, steps, and public worship place where Paul preached will enhance your understanding and love for the Bible. The ruins of this important cultural centre are fascinating as we walk along the stone path that the Apostle Paul walked. The engineering skill and intellect of these people are evident in the water systems that still flow from ancient to modern day. Our guide will be sure to show you the room dedicated to the medical care of that period. We travel on to the top of the nearby Acropolis where our guide will speak on the worship practices and point out the bird’s eye view of what was a bustling city of around 800,000 during Paul’s stay. Another important stop is a visit to Diolkos where we view the paved trackway which enabled boats to be moved overland across the Isthmus of Corinth and served as a life line for Corinth. This shortcut allowed ancient vessels to avoid the long and dangerous circumnavigation of the Peloponnese peninsula. Before returning to Athens, we will visit Cenchreae, the ancient port region of Corinth. Acts 18:18 states the Apostle Paul stopped at Cenchreae during his second missionary journey, where he had his hair cut to fulfill a vow.

Please prepare for a dress code today. In Meteora, women are required to wear skirts below the knee and men, pants.
From Athens, our tour travels northward past Thermopylae where we learn of the famous Spartan battle of 300. We continue through the mountains to Meteora. Here we see the world famous Byzantine monasteries that are perched precariously on summits of grey rock pinnacles of varied and beautiful shapes. Their history goes back to the 14th century when the monks sought refuge in the cliffside caves then fled higher to build the original wooden shelters, later transformed into monasteries. Our lodging this evening will be in Meteora.

Traveling northward into Macedonia we visit King Phillip’s (Alexander’s father) tomb in Vergina, one of the most outstanding finds in all of Greece. A stop will be made in Berea to view the ancient synagogue where Paul spoke and the Bema surrounded by mosaics of Paul and the plaque of scripture regarding the “more noble” church. The New Testament books of I & II Thessalonians will come alive to us today as we arrive in the delightful harbor city of Thessalonica. En route to the hotel we will view the old city ramparts; the newly excavated Forum, St. George Church, an ancient Roman monument which was transformed into a church and the Galerius Arch which rises over the famous Via Egnatia. We spend two nights here.

We transfer to the airport for our onward flight.

Not Included: Land Portion – travel/cancellation insurance, gratuities to guides and drivers.
Cruise Portion – Port taxes & service charges. ($165 will be added to your final invoice to prepay this cruise charge)
Flight Departures – Special fares are available nationwide including transfers. (transfers not included unless airfare is purchased from Pilgrim Tours)

Deposit Required: US$500 per person will reserve your place. A US$150 service fee will be charged for cancellation at any time in addition to our normal payment and cancellation policy.