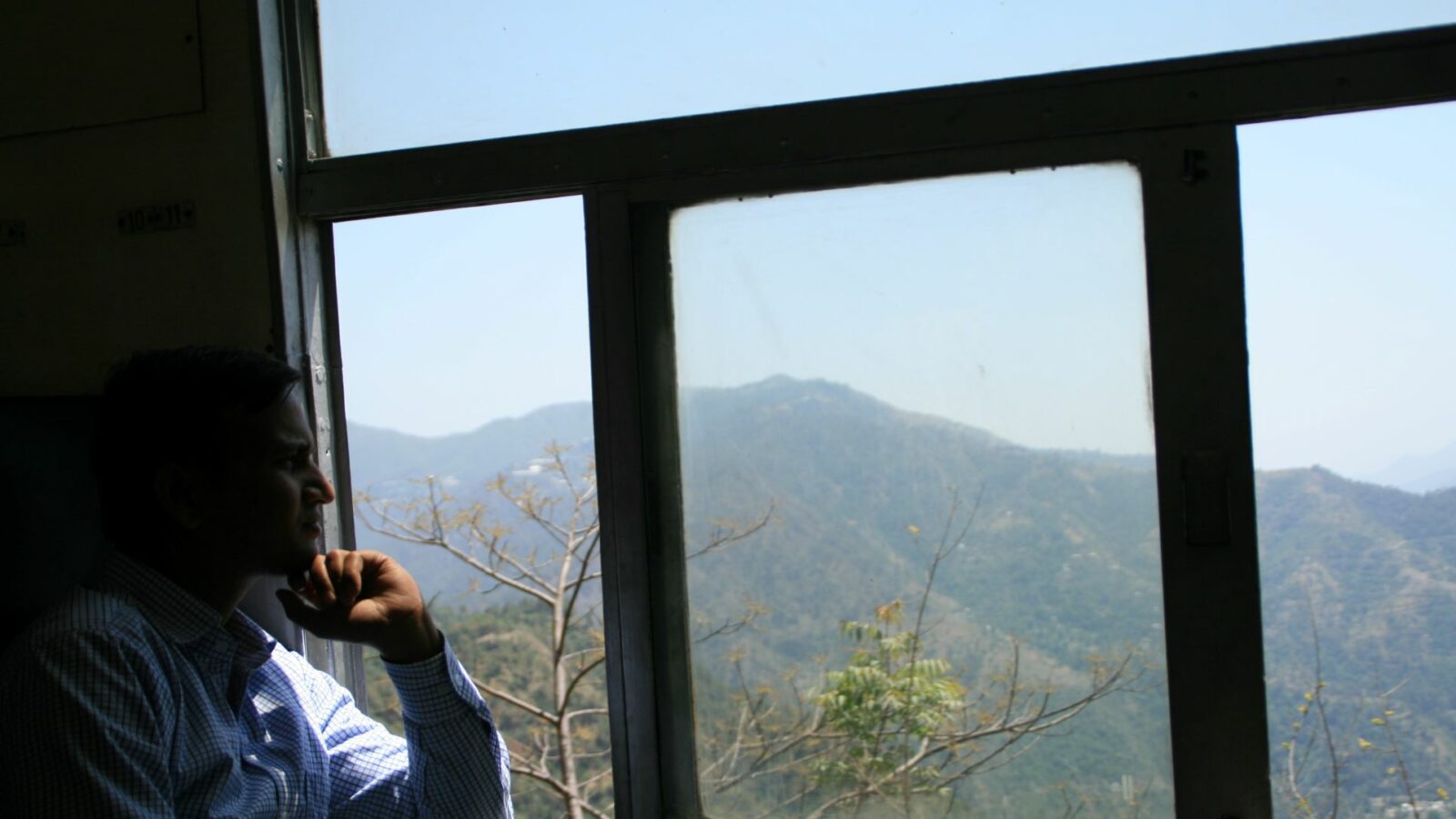 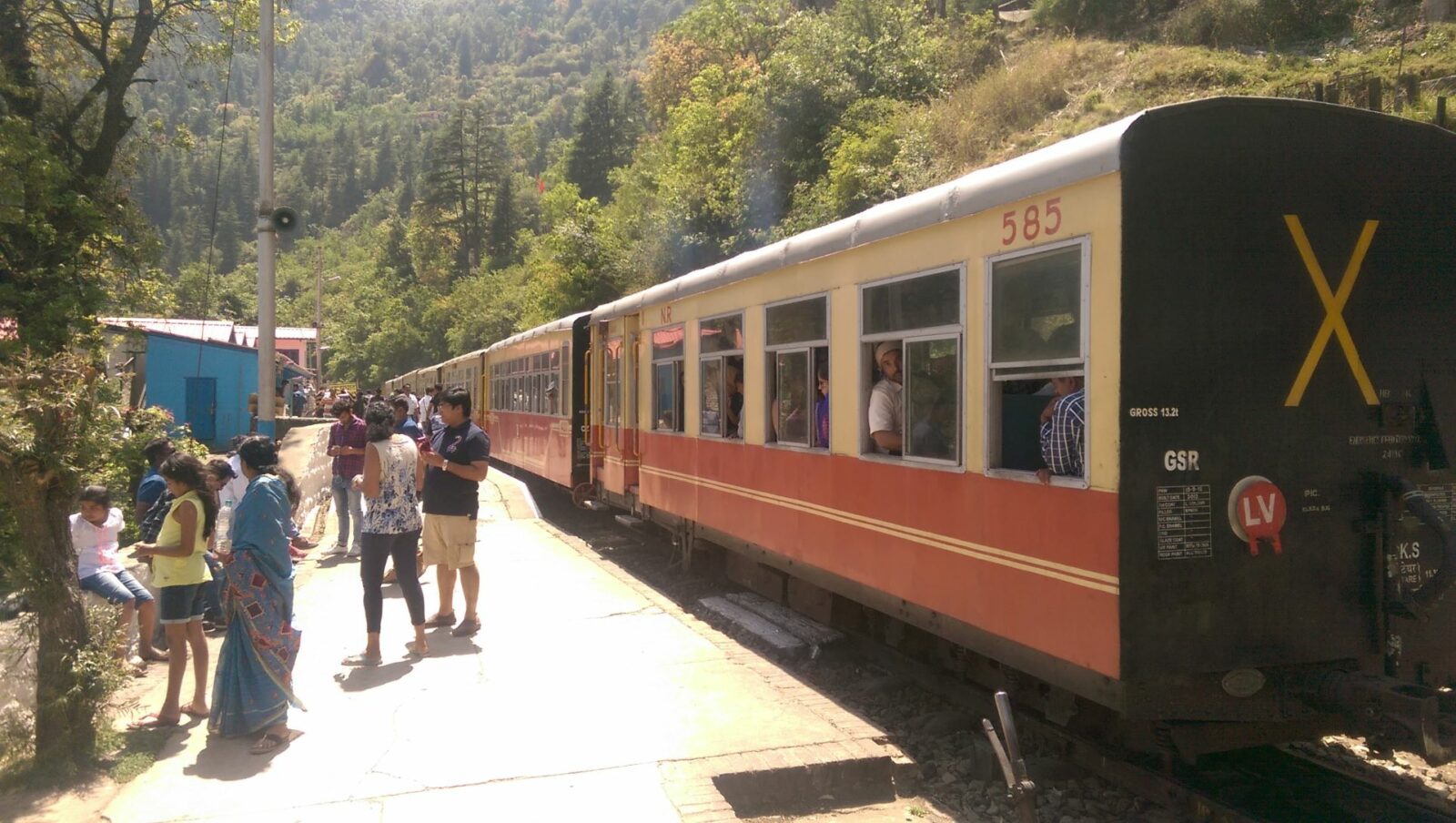 Marvel at historic temples, spot an elusive tiger and visit beautiful palaces. Spend 13 days exploring colorful India on this round-trip journey from Delhi. We explore the country's historic temples and palaces and visit the wild Ranthambore National Park. Our trip is enhanced by luxurious hotel accommodations and travel aboard some of the country's most impressive trains. Begin in Delhi, where you board the Shatabdi Express, which travels to Shimla. In Shimla, a guided tour introduces us to the colonial past of this city in Northern India. After a day to explore at leisure, we return to Delhi to explore both the Old and New parts of town, immersing ourselves in "real" India. From Delhi, we board Gatimaan Express and feel the excitement come to a pinnacle as we head toward the Taj Mahal, Agra Fort and Fatehpur Sikri, a 16th-century city constructed of red sandstone. The tour wraps up as we try to spot wild Bengal Tigers in Ranthambore National Park and explore the "pink city" of Jaipur. The contrasts of India are displayed beautifully on this tour.

Meet your group and Tour Manager at the 5-Star Taj Palace hotel in New Delhi. Delhi is one of India’s most colourful and exciting metropolises, where the old and new cities exist harmoniously together.

We leave Delhi on the Shatabdi Express to Kalka. Here we board the UNESCO listed narrow-gauge Himalayan Queen, which is also affectionately referred to as the ‘Toy Train’. Covering a journey of 60 miles, the train gradually passes through the Shivalik foothills of the Himalayas, passing over 864 bridges and through 102 tunnels on its journey to Shimla. The train moves at a leisurely pace, giving us time to soak in the incredible panorama of the surrounding scenery. Alternatively, you may choose to make the journey by car.

Shimla was ‘discovered’ by the British in 1817, and was later used as a fashionable retreat from the summer heat thanks to its lovely temperate climate. In 1864, the Government of India declared Shimla as their official headquarters during the hot season. Because of this, many of the town’s buildings are very British in style. We spend three nights at the heritage 5-Star Oberoi Cecil Hotel.

We begin our day with an informative talk from our expert guest speaker, Raaja Bhasin, before our exploration of Shimla continues with a sightseeing tour that takes in much of the local colonial heritage. We begin at the Viceregal Lodge, the summer seat of the viceroys until the 1940s. This afternoon, a leisurely stroll takes us past the town’s Gaiety Theatre, the Victorian-Gothic Christ Church and Scandal Point, named thus due to it being a popular social meeting place where people would gather and share gossip.

On Day 4 you are free to explore at leisure. Alternatively, embark on an optional excursion to the Kufri area of upper Shimla, where you can enjoy incredible views of the snow-capped mountain peaks of the Himalayas, followed by a visit to Wildflower Hall, the former residence of Lord Kitchener – a noted senior British army officer. Now a hotel, this beautiful building sits amidst a verdant forest with incredible views of the surrounding Himalayas. Here, you can enjoy a high tea lunch and a walk around the gardens (payable locally).

We leave Shimla and return back to Delhi, for two more nights. On Day 6 we visit Old Delhi, taking a rickshaw ride through the narrow streets of Delhi’s bazaar for an incredible insight into the lives of the millions of people who live in the city. As you travel towards Chandni Chowk, you will be immersed in real India. We also visit the Jama Masjid which boasts the title of being India’s largest mosque, Raj Ghat, a simple but moving memorial to Gandhi, ‘the father of the Nation’, and pass Delhi’s Red Fort. Later we embark on a sightseeing tour exploring the wide, leafy avenues and impressive colonial architecture of New Delhi. Our tour includes India Gate war memorial, the grandiose Rashtrapati Bhavan, Humayun’s Tomb and Qutab Minar, India’s tallest stone tower, built in 1199.

We join the southbound Gatimaan Express early this morning to Agra. On arrival, we visit Agra’s imposing Red Fort, originating from the 15th century and considered India’s most important fortification. Built on a hill above Agra, its centrepiece is a tower with a marble balcony where Mughal Emperor Shah Jahan spent his last days imprisoned.

Later we travel across the city to the spectacular Taj Mahal, one of the new Seven Wonders of the World. Built by the Mughal Emperor Shah Jahan in 1653 in memory of his favorite wife Mumtaz Mahal, this iconic white marble building is a true monument to undying love and is the world’s finest example of Mughal and Persian architecture.

We depart Agra by coach, stopping at Fatehpur Sikri, a perfectly preserved ancient red sandstone city built in the 16th century as India’s political capital, but abandoned after only 14 years due to lack of water. Remarkably, the city remains exactly as it was 400 years ago, giving us an excellent insight into how life was during the time of the Mughal Empire. After a guided tour of the empty, ghostly buildings, we continue to Ranthambore. Our hotel here is the brand-new, 5-Star Sawai Vilas, set within acres of stunning gardens, lakes, and fountains on the border of Ranthambore National Park and Tiger Reserve. 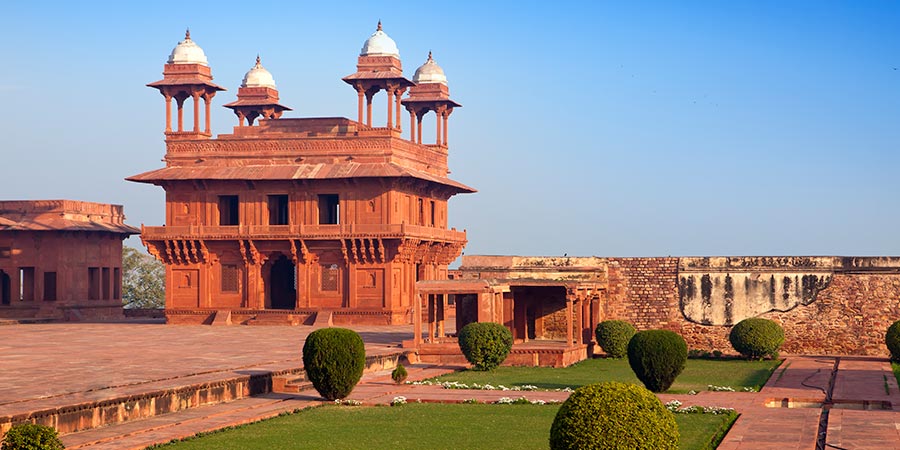 Ranthambore National Park is renowned as one of the best places in the world to spot wild Bengal tigers, and we head out on a game drive this afternoon to try to catch a glimpse of these majestic, elusive creatures, traveling in open-topped safari vehicles called ‘Canters’. We are treated to a further morning game drive on Day 10,  increasing our chances of observing and photographing the activities of the tiger, as well as the myriad of other rare native wildlife that can be found here, including leopards, deer, and crocodiles. This afternoon, we continue to Jaipur, where we check into our hotel for two nights.

We begin our stay in the ‘Pink City’ with full-day sightseeing tour, traveling by Jeep to the Amber Fort, located high on a hillside overlooking a lake. We have the chance to explore some of the ornate rooms within the palace complex before we continue our tour, seeing the ornately decorated City Palace, home to the current Maharajah of Jaipur, as well as the early 18th century UNESCO listed Astronomical Observatory. We also drive past the Palace of the Winds, a stunning red and pink facade built in 1799, whose intricately latticed windows were designed to allow the ladies of the royal household to look over the streets below without being seen.

This afternoon we drive back to Delhi, where we spend our final evening. On Day 13, you make your way to the airport for your flight back home.

We travel on the Gatimaan Express in India. Running 188km from Delhi to Agra in a journey that takes just over an hour and a half, this is India’s first semi-high speed train and the fastest train in India. The Gatimaan Express first opened in early 2016. On board, you can be served traditional Indian cuisine by dedicated train hostesses, as you relax in fully air-conditioned carriages, and enjoy the passing Indian scenery. There is also complimentary Wi-Fi, and an app that provides access to movies, music, and news on board.

The Shatabdi Express trains are some of the fastest in India and are the pride of Indian Railways. Fully air conditioned and of a far superior standard to most Indian trains, the Shatabdi Express apparently always arrives at the best platform a station has!

The average speed on most lines is 68mph (110km/h) although the service between Agra and Delhi can reach speeds of 80mph (130km/h). During our journeys on the Shatabdi Express we travel in air conditioned Chair Class. Complimentary snacks, meals and beverages are generally provided during the journey.

The Shivalik Express, affectionately referred to as the ‘Toy Train‘ travels between the Indian town of Kalka and Shimla, capital city of the Indian state of Himachal Pradesh. The Toy Train’s ninety-six kilometre narrow-gauge track through the Shivalik foothills of the Himalayas is one of three Indian mountain railways which together constitute a UNESCO World Heritage Site.

Built by British colonists, the Kalka-Shimla Railway opened in 1903. An extraordinary feat of railway engineering, the line negotiates 102 tunnels, more than 864 bridges and around 919 curves. The Toy Train’s passengers have plenty of time in which to admire and marvel these features as well as the spectacular mountain panorama that line the route, tackling the 1 in 33 gradient as the train makes its ascent to Shimla demands a leisurely pace. 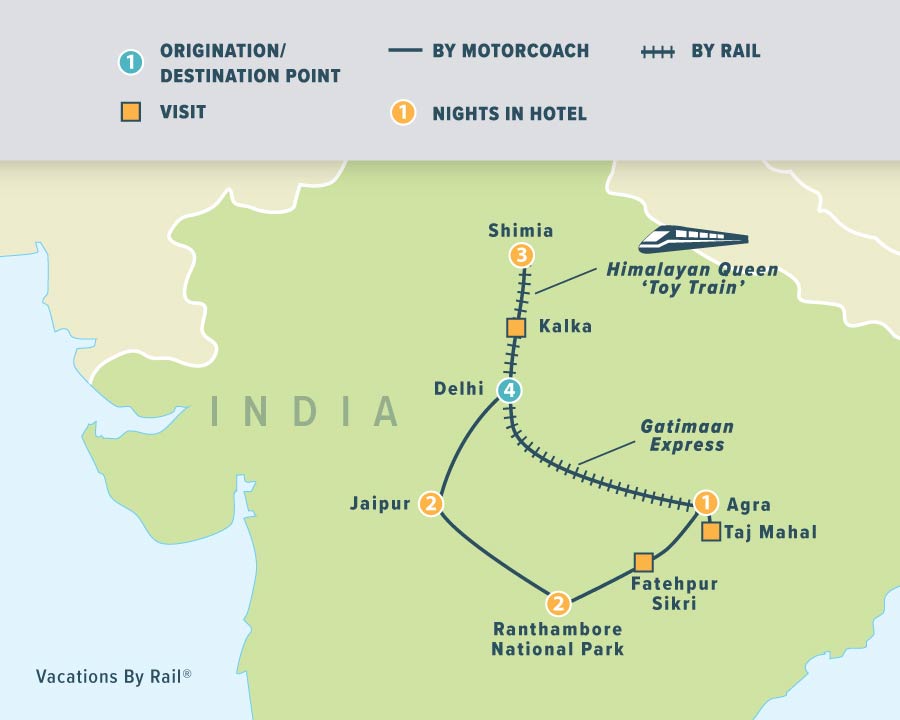