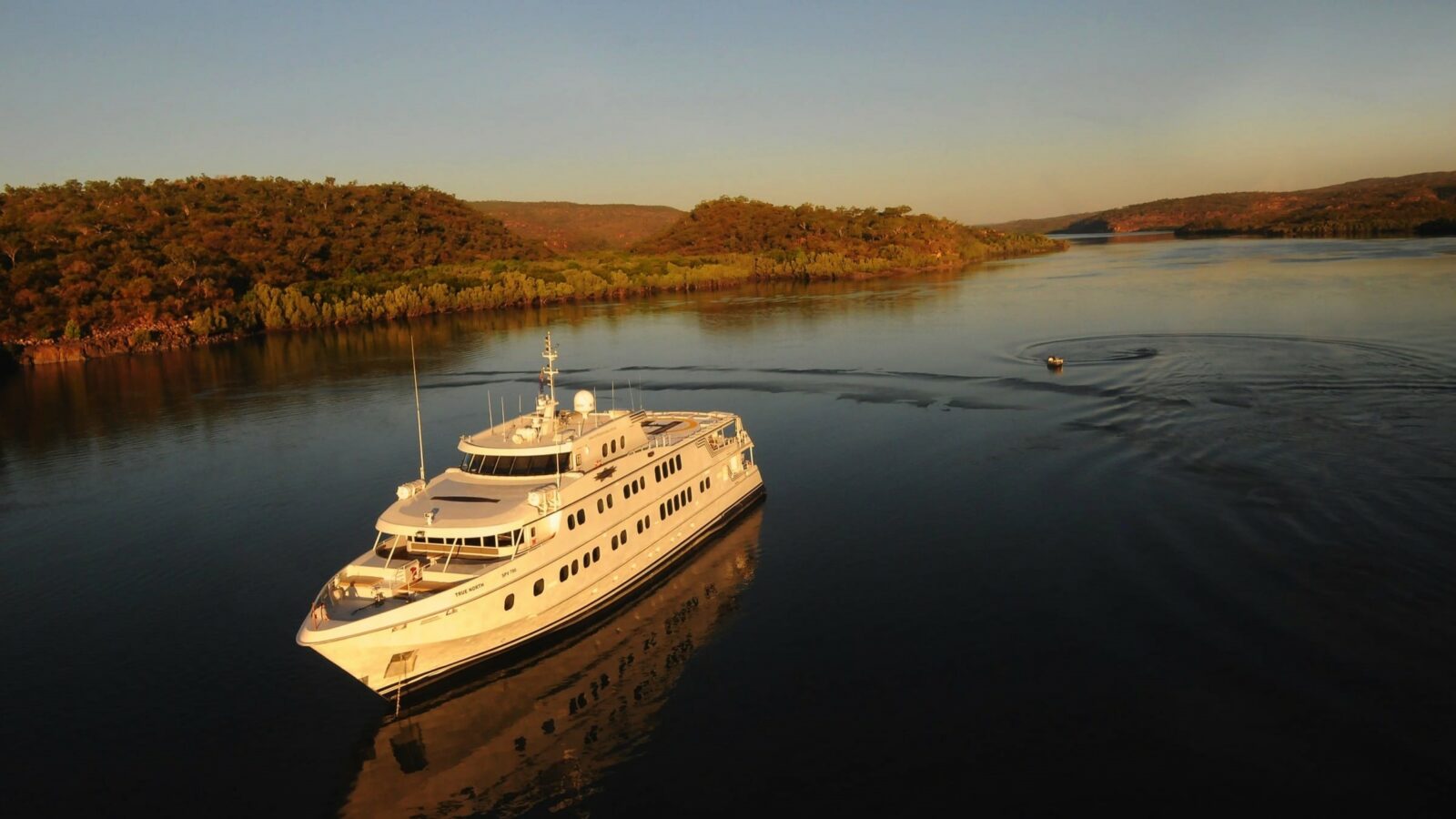 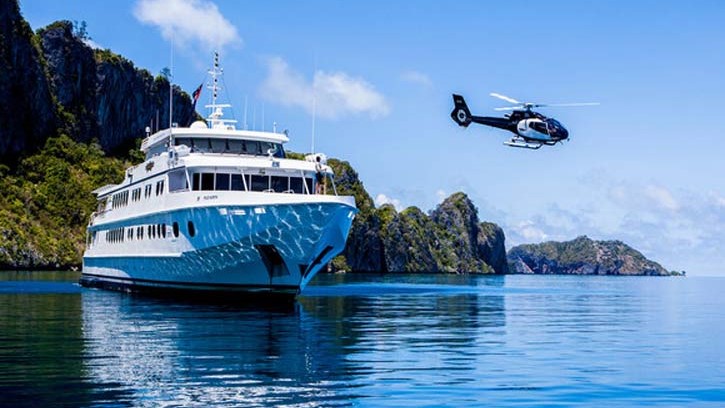 A rare opportunity to explore the acclaimed Louisiade Archipelago. One of the great island arcs of the South Pacific stretching some 400km along the northern rim of the Coral Sea. Plus the mysterious Trobriand Islands, spectacular Bougainville and much, much more!

In the wake of turbulent times very few tourists have journeyed to the island of Bougainville. The more intrepid are only recently rediscovering the island’s mysterious charms and, your time aboard the TRUE NORTH is bound to embody the spirit of adventurous travel. 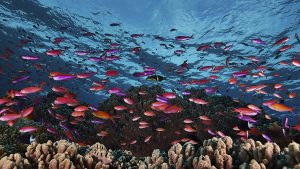 Wake this morning at the stunning Deboyne Islands. During World War II the Japanese used the atoll briefly as a seaplane base. It was quickly discovered and bombed by Australian aircraft and several ships and planes were either sunk or ditched in the surrounding lagoons. Time to don mask and snorkel and to drift over the shallow wrecks. The adventure boats will also venture outside the lagoons on fishing and diving excursions. A visit to Panepompom Island provides opportunity to experience idyllic archipelago life. The ‘locals’ will welcome you on the beach, treat with impromptu singing (and laughing) and then invite all to stroll amongst their huts. Our crew will also take the opportunity to deliver appreciated resources to the local school before the adventure boats are away again. In the afternoon the ship’s helicopter will provide breathtaking orientation to the Calvados Chain especially distinctive Panasia and Duchateau Island. Here the islands are steep sided and ‘Jurassic Like’. Fishing, diving and snorkelling will be on the agenda or perhaps you would prefer a short hike to a picturesque cave on exotic Panasia! 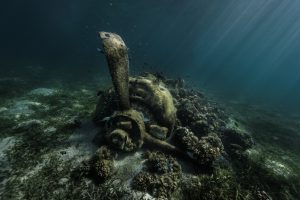 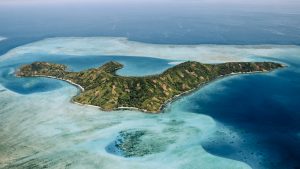 A day set aside for exploring beautiful Egum Atoll which lies between the D’Entrecasteaux, Woodlark and Trobriand Island groups. A visit to the main village includes a delightful experience with the local school children. Enjoy fishing, snorkelling and diving and conclude the day with beach drinks on your ‘very own’ palm-fringed beach! 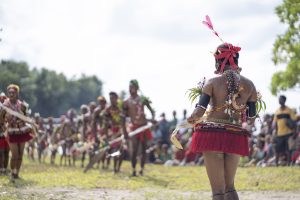 The first European visitors to the Trobriand Islands came in 1793 aboard the French ship Esperance and the ship’s navigator, Bruni d’Entrecasteaux, named the islands after his first lieutenant, Denis de Trobriand. Even today, the island’s residents are somewhat infamous for their local customs which include a very relaxed attitude to sexual encounters. Most villages have a special hut called a bukumatula which is used for extramarital encounters and babies are thought to be the result of magic without any link to sex and pregnancy. Yams and banana leaves are traditional local currency.

Join the crew on a fascinating visit to one of the main villages where the locals will entertain with a cultural sing-sing and showcase handmade wood carvings. There may also be opportunity to join in a sporting event with a twist – cricket, Trobriand style! 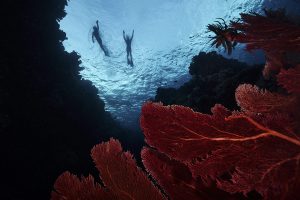 Woodlark Island is a small island with a population of about 6000. The island is surrounded by coral reef and there will be plenty of opportunities to fish, snorkel, dive and sightsee in this remote and picturesque location. Meeting the locals is also a highlight.

In the afternoon we will visit the northern side of the island where dense jungle meets the ocean and hangs overhead as you sit in the atoll’s crystal clear waters. Woodlark is also home to an extensive creek system that will beckon the explorers on-board. 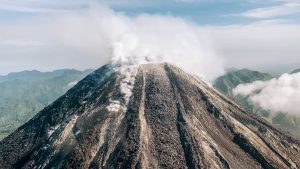 After an overnight steam from Woodlark, wake this morning ready for the impressive scenery of Bougainville! The island is covered in thick jungle and the dormant volcano of Mount Balbi rises to 2685 metres. Take a heli-flight over Mount Bagana. Although Mount Balbi rises taller, Mount Bagana is one of the most active volcanoes in Papua New Guinea. We will also overfly Benua Cave – an impressive sinkhole located on the west coast of the island. Benua is the largest ‘cavern’ in the world and contains tall stalagmites.

The underwater environment along the west coast of Bougainville is also a treasure trove of tropical fish species making snorkelling and diving equally enticing activities. The visibility is exceptional and there are more opportunities to discover wartime wrecks in shallow water. In addition to the stunning scenery, you will also find the Bougainville locals to be incredibly friendly and keen to showcase their arts and crafts. 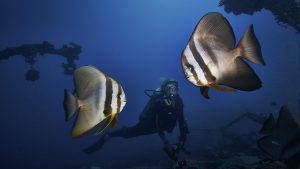 Another day off magical Bougainville! In the early morn snorkel or dive over more relics from an era past. West Bougainville features some known fish ‘pressure points’ which often produce exceptional species diversity. There will also be opportunity to tackle light game species in the blue water.

And then something special is on the agenda today. The chance to join a ‘famous’ TRUE NORTH heli – picnic albeit one that is a little different to the norm! Land in a clearing midst dense jungle with towering canopy and join a short walk along a jungle track. Then picnic TRUE NORTH style adjacent to a picture-perfect waterfall and swimming splendour! 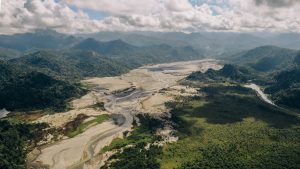 After two days exploring the west coast of Bougainville it’s now time to turn our attention to North Bougainville. This includes the bustling town of Buka which is actually located on its own island only separated from the main island by a narrow passage. Take to the air today for a stunning heli-flight as your pilot circumnavigates Buka Island. The day is also filled with snorkelling and diving in and sightseeing around the many surrounding atolls. In the afternoon we’ll visit a marketplace on Buka.

Today we explore the eastern side of Bougainville and encounter distinctive cultural display. Hear stories of the island’s infamous civil war and squeeze in one last day of snorkelling and diving. Visit colourful Pok Pok village and see a bamboo windpipe sing-sing. Fly over the nearby volcanic lakes and the also infamous Panguna mine site before finishing the day with sunset drinks on a ubiquitous palm-fringed beach. 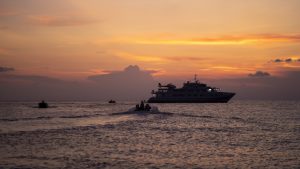 The chefs will prepare one final breakfast as you look back on your South Pacific impasto. A voyage filled with culture, character and the very nature of Papua New Guinea – a world far from tourism en masse! After breakfast we will provide transfer to the airport at Buka for your charter flight back to Cairns. And, we will already be looking forward to our next adventure together!

Return charter flights ex Cairns ARE INCLUDED in the tariff. This itinerary is provided as example only – prevailing conditions, local arrangements and indeed, what we discover on the day, may cause variation. Helicopter flights can be purchased additional to the indicated tariff as a package or individually.