The Legendary Silk Road by Private Train from Almaty 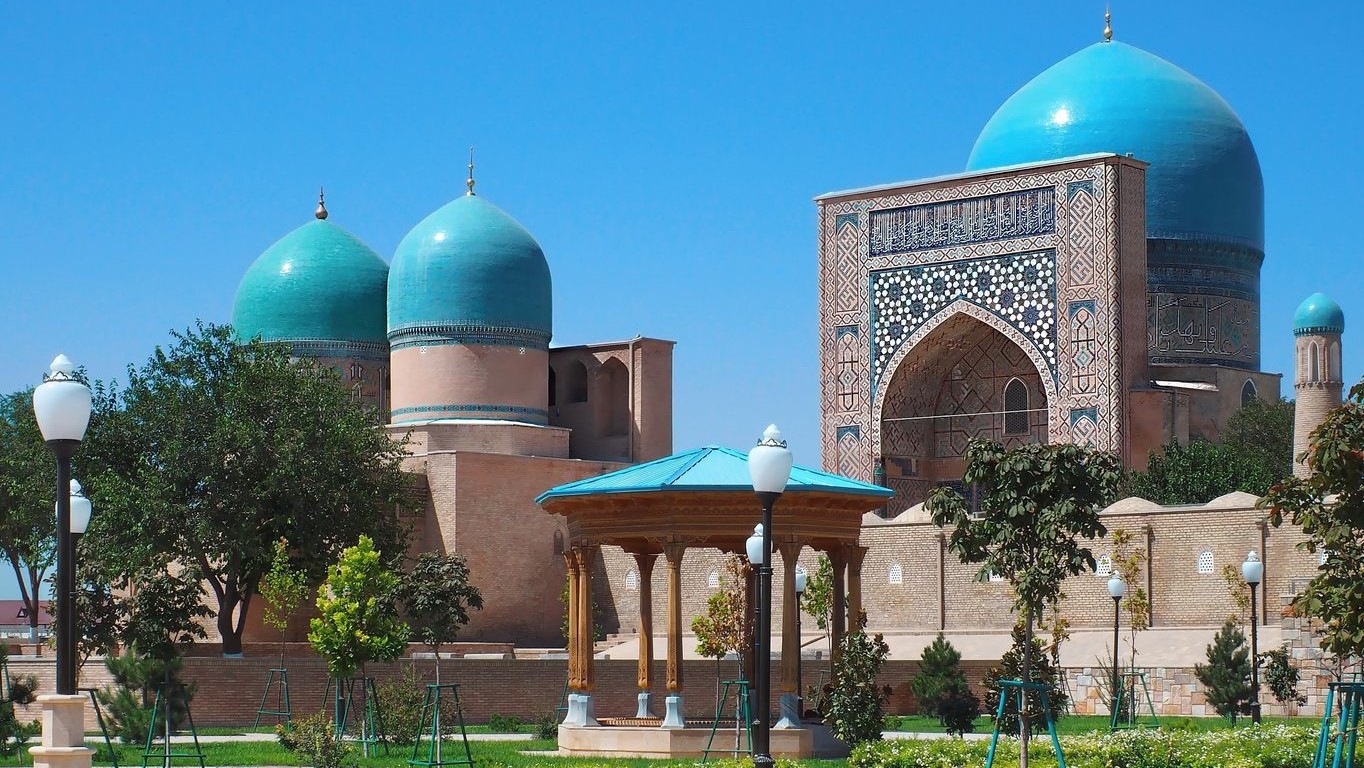 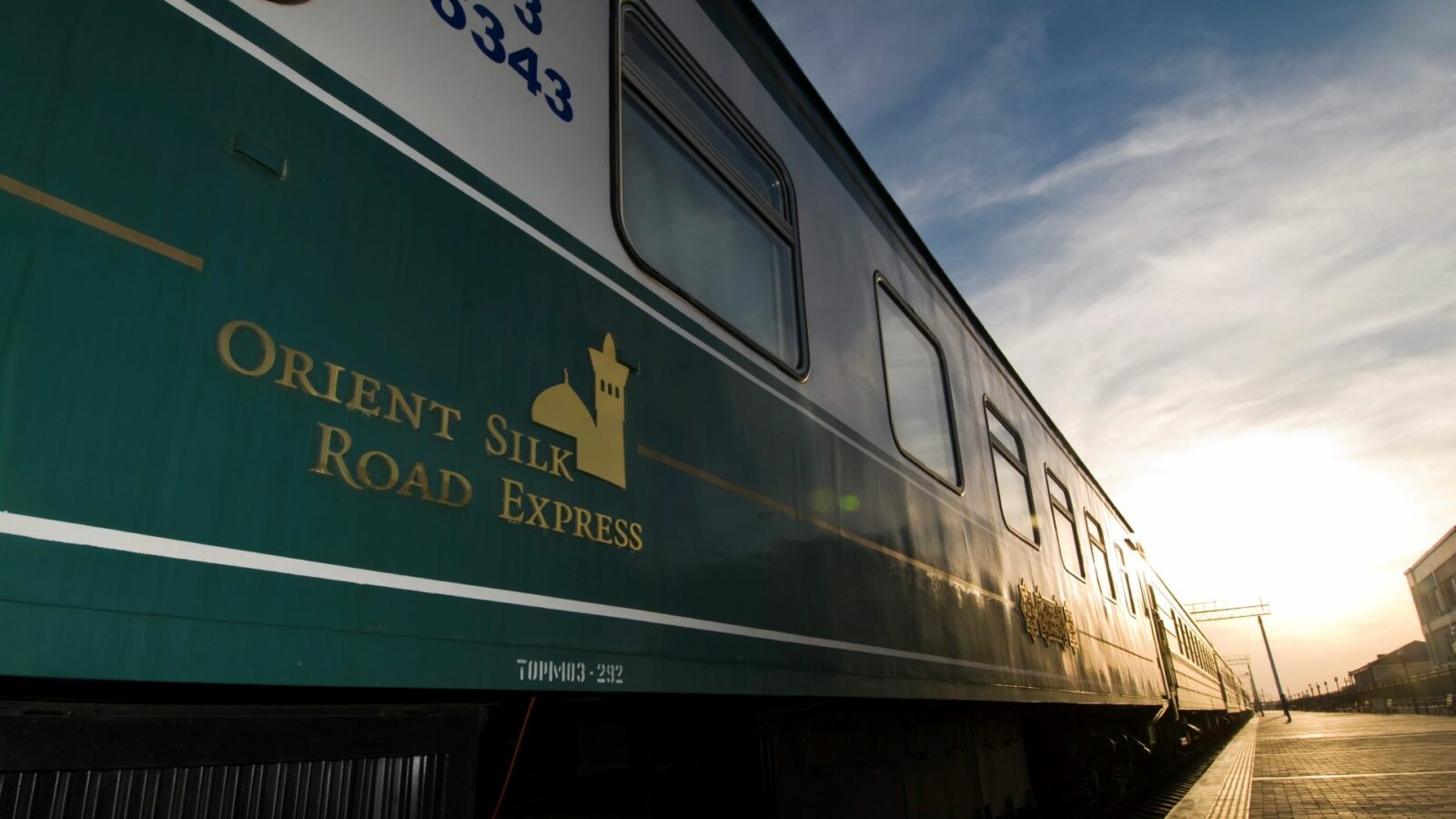 Follow the legendary Silk Road back in time, across three countries and seven UNESCO World Heritage sites.
Enjoy a comfortable Central Asian private train journey in a region usually limited to long, uncomfortable bus rides. Embark on an unforgettable journey aboard the Orient Silk Road Express private train, following the legendary Silk Road trade route in Central Asia. Explore Kazakhstan, Uzbekistan and Turkmenistan, three unique countries whose histories and modern-day cities reflect the immense influence of the world’s most famous trade route. Experience an adventure like no other, meeting people and discovering cultures that most travellers miss, including medieval monuments to great civilizations of the past.

Visit 7 breathtaking UNESCO World Heritage sites in 14 days
Walk through the enchanting streets and markets of Khiva and Bukhara
Marvel at impressive medieval city gates, walls and glittering domes
Witness the unique beauty of Registan Square, one of the most beautiful squares in the world
Get insight into the daily lives of locals, including a meal with an Uzbek family
View a traditional folklore performance in a madrasa
Have lunch in the former Summer Palace of the Emir

Just as Silk Road merchants did centuries ago, you arrive in Almaty, Kazakhstan’s vibrant capital city, welcomed by the cool midnight air. A bus whisks you away to your well-appointed hotel, where you spend the first night of what will be an unforgettable journey. Dreams of your Silk Road adventure begin to fill your head as you lie down to rest. Tomorrow you will wake early to explore this legendary city.

Today you explore the amazing city of Almaty, Kazakhstan’s capital. You stand beneath the brilliantly coloured patterns of the Ascension Cathedral, one of the largest wooden buildings in the world. You stroll through the city’s streets, discovering its hidden gems on the way. You have the chance to sit in a typical café, framed by the foothills of the Tian Shan Mountains. After an enjoyable welcome lunch in a yurt restaurant, you hop aboard your the Orient Silk Road Express, your private train on this legendary journey.

Aboard the Orient Silk Road Express, you enjoy a tasty breakfast as the gorgeous landscapes of the Central Asian steppes pass by the dining car window. Soon you arrive in the city of Turkistan, known for the magnificent Mausoleum of Khoja Ahmed Yasawi, a popular religious pilgrimage site. Its historic design, including its beautiful tiling and brickwork, is known for being the earliest example of Timurid architecture. Its impressive turquoise dome is the largest in Central Asia. The mausoleum has long been a symbol of the Kazakh nation and is now a UNESCO World Heritage site.

Today you wake up in the capital of Uzbekistan, Tashkent, a city filled with medieval monuments of its past, surrounded by the region’s lush, green steppes. Here you visit caravanserais, inns traditionally used as lodging by caravans along the Silk Road trade route. You also visit beautifully restored medieval fortresses and madrasas (madrasa is the Arabic word for an educational institution), built from brick and turquoise tile. Later that evening you board your private train and depart for the city of Shahrisabz.

Today under bright blue skies, you explore the city of Shahrisabz, including its historic centre, which is a UNESCO World Heritage Site. Formerly known as Kesh, Shahrisabz is the birthplace of fourteenth-century Mongol conqueror Timur. Many of the monuments you visit here were built as testaments to his power, including Ak-Saray, his summer palace. Later you enjoy a traditional folklore performance in a small village, where you meet some of the locals. That evening you enjoy a tasting of Uzbek wine on board your private train, which departs for the city of Samarkand.

Day 6. Samarkand and Its Historic Centre

Samarkand is one of Central Asia’s oldest settlements, and in the days of Timur, it was considered the world’s most beautiful city. That beauty seems undiminished as you stand among the carefully restored buildings of Registan Square with their gorgeous tiling, brickwork, domes, and minarets. Equally stunning are the intricate tile designs of the Shah-i-Zinda necropolis—known as the Tomb of the Living King, named for the legend of Kusam Ibn Abbas, who brought Islam to the area now known as Uzbekistan. Later you enjoy a visit to the Afrasiyab excavation site, the oldest part of Samarkand’s historic centre and one of the largest archaeological sites in the world. In 2001 the city of Samarkand was listed as a UNESCO World Heritage Site for its many monuments and preservation of traditional crafts.

Today you delve into the historical traditions of Uzbekistan and visit local craftspeople, whom you observe as they skillfully weave silk into carpets and press mulberry bark into paper. Later you enjoy visits to the magnificent Ulugh Beg Observatory, the beautifully reconstructed Bibi Khanum Mosque and the impressive Gur Emir Mausoleum.

This morning you enjoy a delicious breakfast and have one last walk through the enchanting streets of Samarkand. Around noon you board the Orient Silk Road Express private train, which departs for the next stop on your adventure, the historic city of Khiva. The spectacular landscapes of the Central Asian steppes pass by your window. Green hills and grasslands stretch before you as far as the eye can see, while distant peaks of mountain ranges reach for the sky.

Today you wake up in the city of Khiva, whose numerous historic monuments earned it a spot on the UNESCO World Heritage List as Uzbekistan’s first World Heritage Site. Khiva is known for the well-preserved medieval city walls, gates and fortifications of its historic centre, Itchan Kala. You take a tour through the city’s charming, winding streets, where you discover the beauty of its many palaces, mosques, mausoleums and madrasas. It is filled with stunning architectural monuments like the multi-coloured Kalta Minor minaret, whose alternating bands of tiles leave you speechless. Later you enjoy lunch in the summer residence of a former king.

On your first day in Bukhara you visit the city’s unforgettable historic centre, a UNESCO World Heritage Site, which contains numerous monuments from the height of the caravan trade on the legendary Silk Road. You visit stunning sites like the Po-i-Kalyan architectural ensemble, whose buildings are known for their intricate tiling and beautiful brickwork. This includes the impressive Kalyan Minaret, centrepiece of the ensemble, the gorgeous Kalyan Mosque and the intricate Mir-i-Arab Madrasa. You also visit the Lyab-i Hauz ensemble, which includes the iconic Kukeldash Madrasa. As you explore these amazing locations, you learn about Uzbek history, including the philosopher and historical character Nasreddin Hodja. You watch beautiful local dances, enjoy traditional Uzbek music and watch a dazzling folklore performance with national costumes in a madrasa courtyard.

On your second day in Bukhara, City of a Thousand Monuments, you return to the Mir-i-Arab Madrasa to continue your exploration. From here you set out to visit Persian king Ismail Samani’s historic burial place, also known as the Samanid Mausoleum. It is a unique example of ninth-century Central Asian architecture, influenced by both Zoroastrian fire temples and Islamic design. Later you visit the enormous Ark of Bukhara, a citadel that was once the residence of the king and a centre of power in the region. As you stand on its high walls, you look out over the city and imagine what it must have looked like centuries ago.

Day 12. Merv, the Ancient Pearl of the East

At daybreak, your private train draws into the ancient city of Merv. In the twelfth century, this was one of the largest cities in the world. by the Silk Road, its fame crossed continents. Now you stand surrounded by ruins that rise up from the desert sand and crumbling arches framing bright blue sky. You walk among the relics of this UNESCO World Heritage site, including the gigantic Tomb of Ahmed Sanjar, the Virgin Fortress, and the cold room, and are invited to lunch in the courtyard of a family home.

You begin the day at the site of ancient Nisa, and follow its smaller relics to their new home in Ashgabat, at the National Museum. The gleaming white marble of the city centre testifies to the young city’s new wealth. In the evening, you settle down to a farewell dinner.

On your last day of your legendary Silk Road adventure, you check out of your hotel and catch a transfer to the airport for your flight home. On the way, you look back on the marvellous journey that you’ve just completed. The beautiful landscapes, impressive monuments and unforgettable experiences you have enjoyed on the legendary Silk Road will be memories that last a lifetime.

Highlights of Your Journey