Zarengold from Beijing to Moscow by Private Train 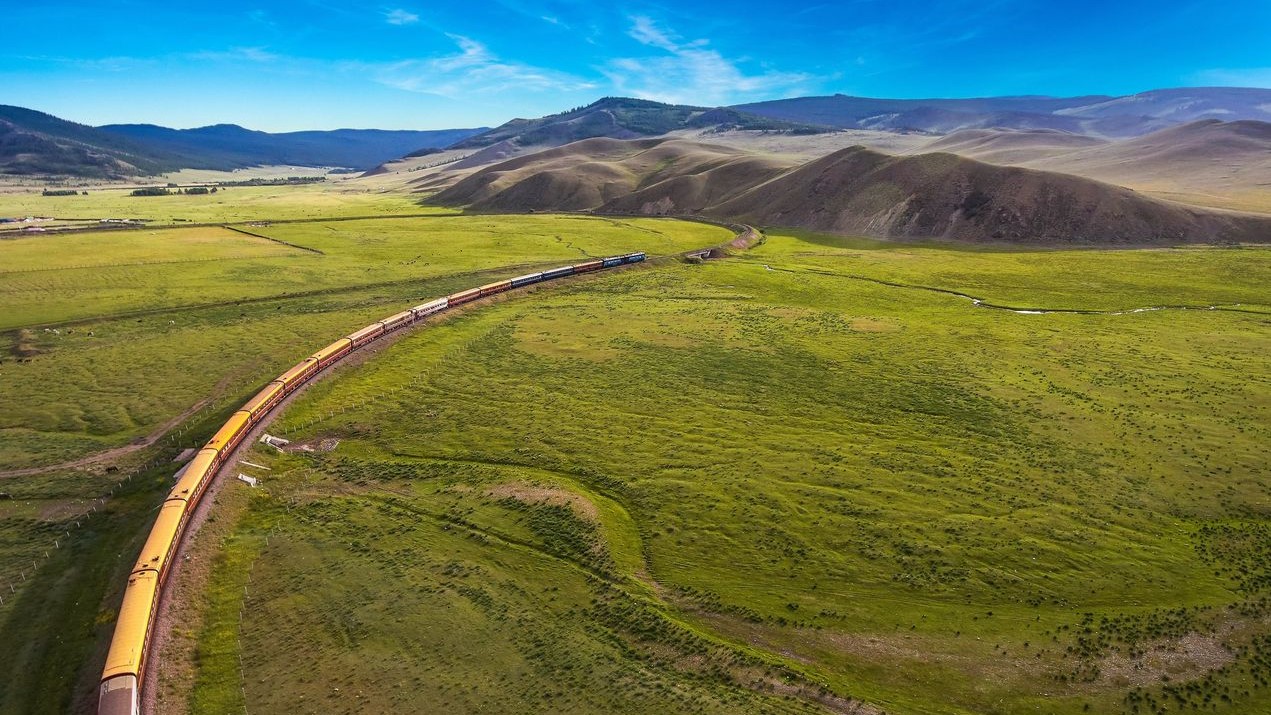 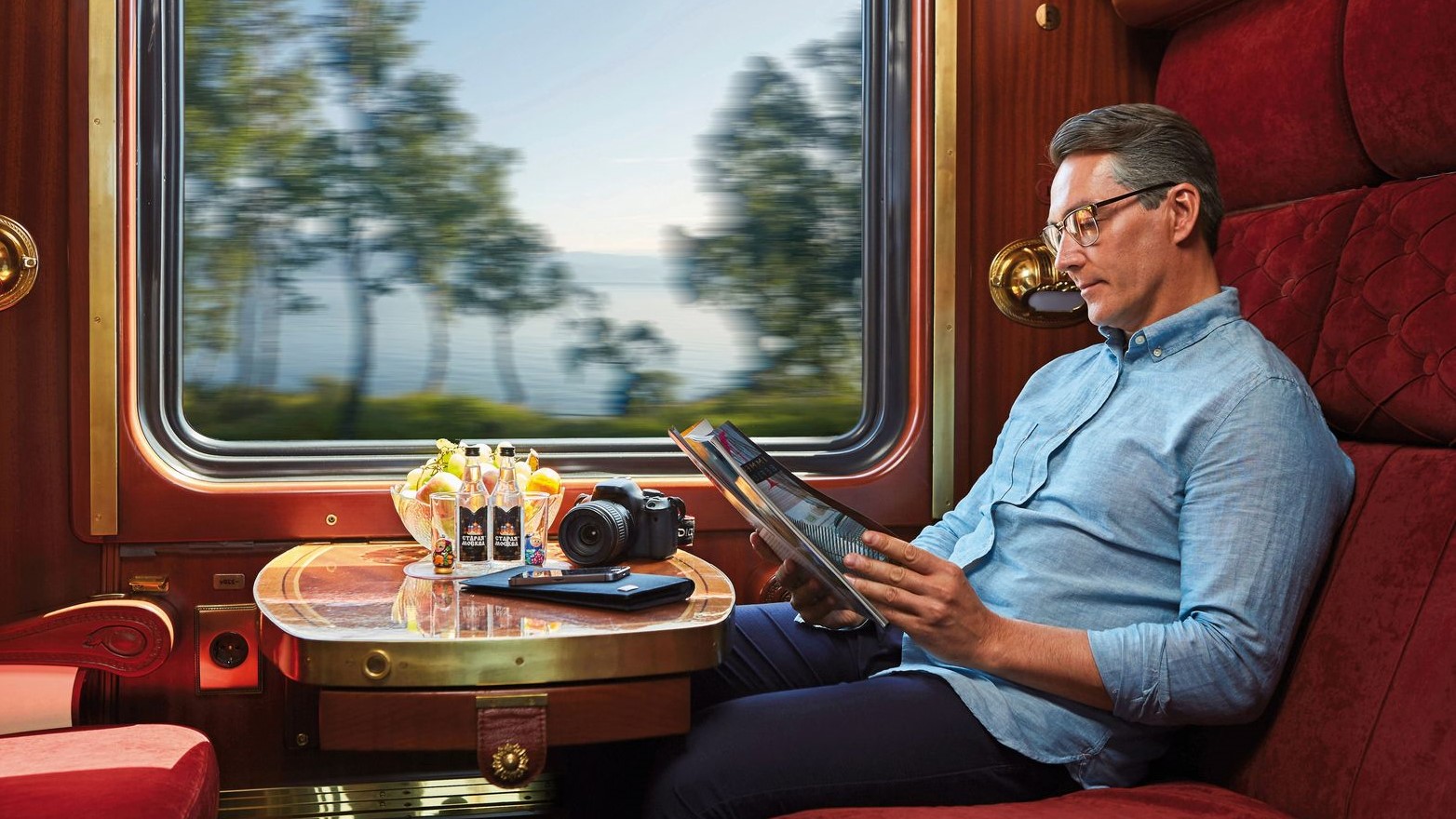 Experience one of the last great travel adventures. Your journey along the Trans-Siberian Railroad, one of the world’s most fascinating and safest train routes, is even more interesting, comfortable, and entertaining with our privately chartered train.
Beijing’s Forbidden City
Tiananmen Square
Mongolian archery demonstration
Panoramic train route directly alongside Lake Baikal
Welcome ceremony with bread and salt in Novosibirsk
Typical Siberian villages
Daily talks on the region’s culture and people
Vodka tasting with Russian snacks and red caviar

You are greeted at the airport by your friendly tour director and accompanied to your centrally located high-end hotel, where you have time to relax. The tour through Beijing shows you many of the colourful facets of this large metropolitan city. The highlights are certainly the Temple of Heaven and historic Tiananmen Square, two of the city’s most famous sights, but it also includes recent achievements in contemporary architecture, such as the Bird’s Nest Olympic stadium, and several futuristic sky scrapers. Afterward, you enjoy a welcome dinner. Overnight: Capital Hotel (or similar). Meals included: Dinner (D)

Today you visit the Great Wall, the eighth wonder of the world. The giant wall extends for more than 6,000 kilometres through the countryside. On the way, you visit the Ming Tombs, a UNESCO World Heritage Site, and the Spirit Way. In the evening, you dine on the world-famous delicacy of Peking Duck. Overnight: Capital Hotel (or similar). Meals included: Breakfast (B), lunch (L) and dinner (D)

Day 3. The Forbidden City and Departure for Mongolia

For centuries the gates to the Forbidden City were closed to the public. Today you have the morning to view its awe-inspiring halls and mysterious temples. In the evening, your rail journey begins as you transfer to the train station and depart for Mongolia aboard a chartered Chinese train. You reach the border city of Erlian in approximately 16 hours the following day. The Chinese train does not include cars in the Nostalgic Comfort or Bolshoi categories. Overnight on board (BLD)

Around noon you reach the China–Mongolia border, where you transfer to the Zarengold private train. The change of trains is necessary because of the different track gauges in the two countries. In the growing city of Erlian, you have some time to explore the colourful local market before your Russian train sets off toward Mongolia. After crossing sections of the legendary Gobi Desert, the train travels through the vast green steppes of Mongolia. Overnight on board (BLD)

Early risers are treated to central Mongolia’s spectacular scenery. In the morning, you arrive in Ulan Bator, the capital of Mongolia. You can leave your large luggage securely in your compartment. During your city tour you see the captivating Choijin Lama Temple, among other things. In the evening, you have the unique chance to attend a performance of traditional Mongolian folk arts, featuring throat singing, the horsehead fiddle, national costumes, and dances—tickets are €14/US$15, to be paid on site. Overnight: Ramada Hotel (or similar) (BLD)

On request, we can organize alternative lodging in a local yurt in the beautiful landscape of the Mongolian Alps for a supplement of €35/US$40—please let us know upon booking. This is a rare experience and a dream come true for nature lovers.

After breakfast you visit the Gandan Monastery, where it is possible to observe a Buddhist religious ceremony. Your bus then takes you to the Mongolian Alps, located some 90 minutes east of Ulan Bator, with their majestic scenery and bizarre rock formations. After a picnic lunch in a yurt camp, you watch a small Mongolian archery demonstration and a traditional wrestling match. Overnight on board (BLD)

You take your leave of the Mongolian steppes today. You travel through the valley of Mongolia’s largest river, the Selenga. You are on the way to Ulan-Ude, where your train reaches the main route of the Trans-Siberian Railroad. Here you go on an informative city tour. Overnight on board (BLD)

Today is spent exploring the remarkable natural phenomenon of Lake Baikal, the largest reservoir of freshwater in the world. In the morning, your train travels directly alongside Lake Baikal, on the old route of the Trans-Siberian Railroad. During two extended photo stops, you have a chance to explore and record the scenic beauty of the lake and its setting. A short boat excursion from Port Baikal takes you out onto the lake. Take a swim in the lake, if you wish, and visit a picturesque Baikal village. Dinner is a Baikal-style picnic on the lakeshore with a view of the incredible natural surroundings (weather permitting). Overnight on board (BLD)

In the morning, you arrive in Irkutsk, the capital of Eastern Siberia in tsarist times. Here you move into your centrally located hotel. You can safely leave your large luggage on the private train. During your city tour you see the Okhlopkov Drama Theatre, the new memorial to Tsar Alexander III, and the photogenic market hall. Around noon you pay a worthwhile visit to an open-air museum of life and work in historical Siberia. Overnight: Hotel Irkutsk (or similar) (BLD)

After breakfast your train passes through the diverse landscapes of Eastern Siberia. Talks on board inform you about the region and a vodka tasting with typical Russian snacks and red caviar is an opportunity to experience firsthand Russian hospitality and clever toasts. Overnight on board (BLD)

Around noon your train arrives in Novosibirsk, the largest city in Siberia. You are greeted with bread and salt in the customary Russian way and taken on a tour of this most Soviet of cities along your route, including the chance to see the mighty Ob River. You go on a brief city tour, with an opportunity to see the market and the opera house. Overnight on board (BLD)

Your train stops in the afternoon in Yekaterinburg, the capital of the Ural Federal District. The city is known as the place where the Russian tsar Nicholas II and his family were murdered in 1918. During a tour, you see the Church on Blood, built in 2003 to commemorate that tragic historic event; and the city centre, beautifully restored in 2009. Yekaterinburg is situated on the border between the European and the Asian continents. Here you can visit the Obelisk on the Border Between Europe and Asia. Back on board you enjoy views of Uralian landscapes and relax in the dining car. Your private train is already rolling across the European continent. Overnight on board (BLD)

After breakfast you reach Kazan, the Tatar capital, on the banks of the Volga River. On a city tour, you see Tatar mosques and the most famous Russian Orthodox cathedral. You also take a tour of Kazan’s Kremlin, where you learn about the turbulent history between the Tatars, the Cossacks, and the Russians. Afterward you enjoy lunch in a city restaurant. Overnight on board (BLD)

Around noon, you arrive in the Russian capital of Moscow—a thriving, prosperous city—and are accompanied to your high-end hotel. At noon you visit the Kremlin grounds with its magnificent cathedral. Several of the building interiors can also be viewed. After dinner, you discover the city’s magic during an hour-long City of Lights tour, including a stop at Red Square, and a ride on the subway to view two of Moscow’s particularly beautiful metro stations. Overnight: InterContinental Tverskaya/Radisson Royal Ukraina (or similar) (BLD)

After an ample breakfast at your hotel, your city tour takes you to the reconstructed Cathedral of Christ the Saviour, Lomonosov University, the Novodevichy Convent, Red Square with its colourful St. Basil’s Cathedral, the former KGB headquarters and the White House. This then marks the end of your memorable journey, and the time has come to head to the airport. We accompany you to the airport and bid you bon voyage. (B)

This grand private train journey from Beijing to Moscow via Mongolia and Lake Baikal is your chance to fulfil the dream of a lifetime.

Our trips are accompanied by an experienced multilingual tour director and a physician travelling on the train. A sophisticated on board program complements a comprehensive excursion and sightseeing package to make your journey truly memorable. Take advantage of the extensive array of services offered by Europe’s most experienced travel organizer on this route.